VIRGINIA BEACH, Va. – March 16, 2021 – As a young child growing up in Pennsylvania, Catherine “Cat” Kinyk always knew she wanted to help people. Little did she know her path would involve helping people by being on call at all hours of the day and night while wearing safety gear, carrying a shovel or operating heavy machinery.

It’s her role as a fully certified utility mechanic with Virginia Natural Gas (VNG) that has brought her full circle back to her roots of helping people; a job that on a daily basis, has her figuring out the complexities of the energy industry and how best to serve her customers and community.

As the 31-year-old Kinyk continues her apprenticeship, she is slated to become one of the first female team leads at the energy company, something that hasn’t happened at VNG in nearly 20 years. 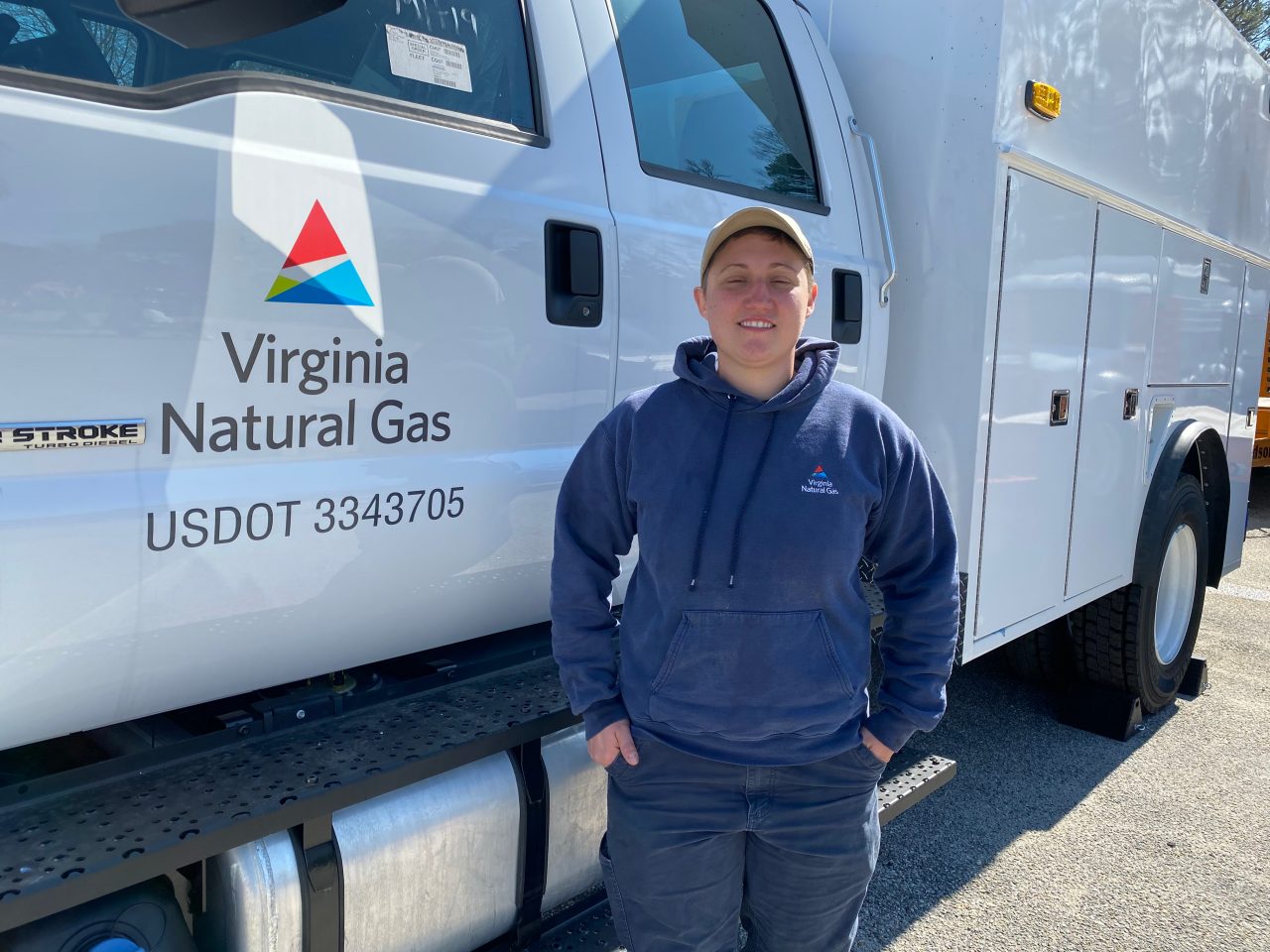 Catherine "Cat" Kinyk is a utility mechanic with Virginia Natural Gas and is in line to become the first female team leads at the energy company, something that hasn't happened in nearly 20 years.

“I try not to think about being the ‘first’ female in a while to hold that designation,” said Kinyk. “I want to be able to open doors for other women to enter this industry. They shouldn’t think they can’t do the job. It just takes determination.”

Kinyk’s road which led to her unique position is not one traveled by many women. Originally, she received a degree in social work from Bloomsburg University in Pennsylvania in 2012, but while she wanted to help people, she found she was spending more time dealing with the bureaucracy rather than helping clients.

Through a series of life events, she ended up in Hampton Roads working retail for a large box store. Looking to get back into social work, Kinyk scoured multiple job sites on the internet and saw a job posting with Virginia Natural Gas.

“It was an entry-level position and I thought, why not apply,” said Kinyk. “I had some experience with electrical work and heating and cooling and knew it would be a good fit for me. Plus, it was time for a change, and this was exactly what I needed.”

Now almost two years into her training, she has become more comfortable with what is required to do the job, constantly learning about the natural gas distribution system she helps maintain. And while she thought her size and height might be a problem, she has overcome those challenges with pure determination.

“Let’s face it, this is a male-dominated field,” she said. “And at 5 feet, 2 inches tall, some of the tasks can be physically demanding. But I’ve been able to show my co-workers that the job really is gender neutral even if some of the men initially offered to step in and take over for me.”

Whether its operating heavy machinery, hand-digging trenches or using a jack hammer to bust up asphalt, Kinyk has been able to overcome the stereotypical challenges associated with the job.

“It’s an extremely physical job, and while it’s physical, it’s not impossible,” added Kinyk. “While there have been some obstacles and challenges, I don’t quit and haven’t been treated any different because I am a woman.”

While Kinyk doesn’t believe in stereotypes, she wants to be able to be a role model for other women to join an industry they might not normally think about. The physical aspect, she said, shouldn’t drive women away from the profession. Neither should what society thinks a “normal” job for a woman should be.

“I love my job,” she said. “Everyone here has been supportive as I have gone through training and learned how to do my job, not treating me as a female, but simply as a valued team member.”

Her supervisor, Mike Bevins, agrees. Since coming onboard with the energy company, Kinyk has been welcomed with open arms, treated fairly and accepted by the team.

“She is poised to be a strong leader in our field,” said Bevins, one of the company’s operations supervisors. “This is also an opportunity for women to see there is great potential for growth in this industry.”

Virginia Natural Gas is one of four natural gas distribution companies of Southern Company Gas, a wholly owned subsidiary of Southern Company (NYSE: SO). Virginia Natural Gas provides clean, safe, reliable and affordable natural gas service to more than 300,000 residential, commercial and industrial customers in southeast Virginia. Consistently ranked in the top quartile for customer satisfaction by J.D. Power and Associates, the company also has been recognized by the Virginia Department of Mines, Minerals and Energy and the Virginia Oil and Gas Association for its safety, innovation, environmental stewardship, community outreach and educational programs, and has been named Local Distribution Company of the year four times since 2015. The company has been ranked by its business customers as one of the most Trusted Business Partners in the utility industry according to Cogent Reports, and as one of the Top Workplaces in Hampton Roads by Inside Business. For more information, visit virginianaturalgas.com and connect with the company on Facebook, Twitter,  Instagram and LinkedIn.

Southern Company (NYSE: SO) is a leading energy company serving 9 million customers through its subsidiaries. The company provides clean, safe, reliable and affordable energy through electric operating companies in three states, natural gas distribution companies in four states, a competitive generation company serving wholesale customers across America, a leading distributed energy infrastructure company, a fiber optics network and telecommunications services. Southern Company brands are known for excellent customer service, high reliability and affordable prices below the national average. For more than a century, we have been building the future of energy and developing the full portfolio of energy resources, including carbon-free nuclear, advanced carbon capture technologies, natural gas, renewables, energy efficiency and storage technology. Through an industry-leading commitment to innovation and a low-carbon future, Southern Company and its subsidiaries develop the customized energy solutions our customers and communities require to drive growth and prosperity. Our uncompromising values.