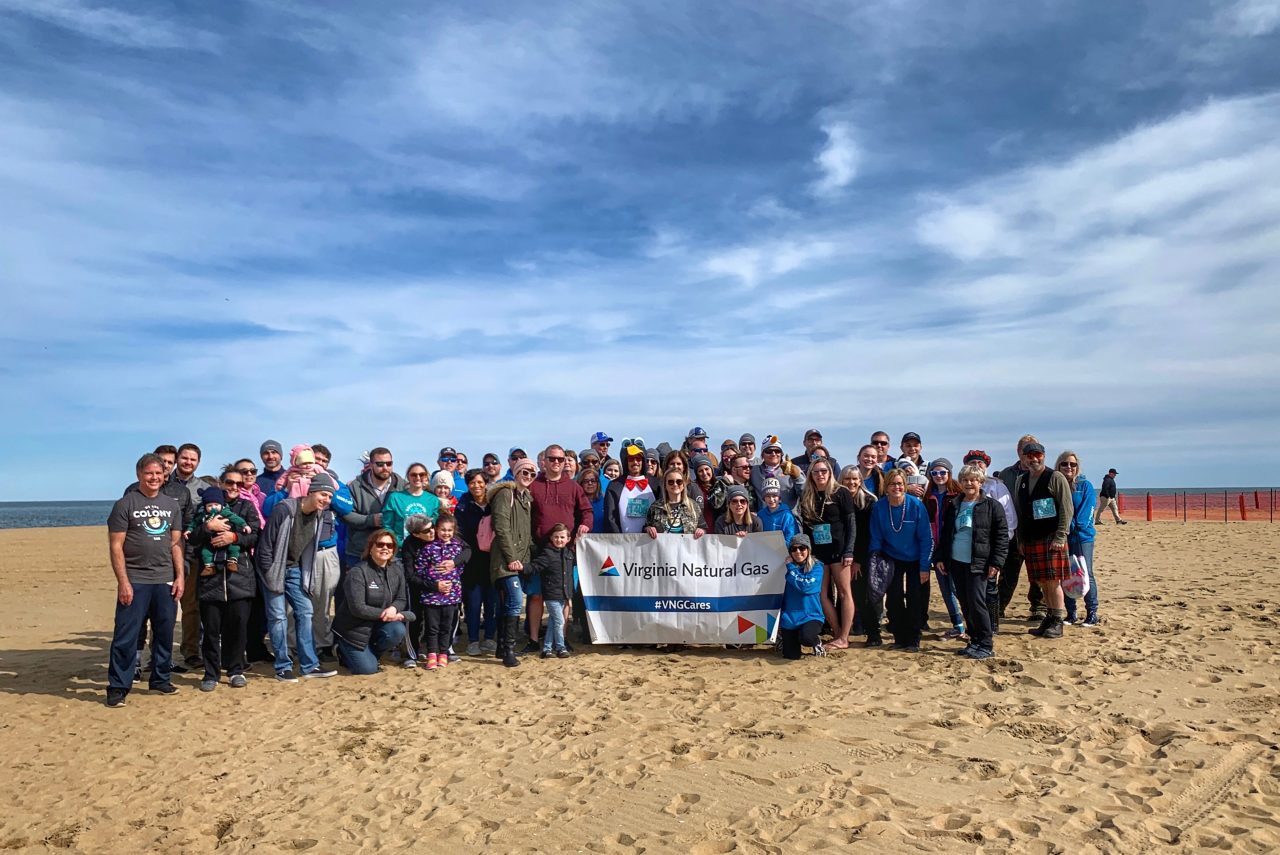 VIRGINIA BEACH, Va. – Feb. 11, 2020 – For Lauren Noland, the idea of purposely walking or running into the icy Atlantic Ocean in the middle of winter didn’t seem like that bad of an idea when she signed up back in early December.

The engineer from Virginia Natural Gas (VNG) huddled up with friends and co-workers on a recent sunny but chilly Saturday morning, and waited for the countdown to move toward the water.

As the crowd around her started shivering and cheering in anticipation, the announcer yelled the words everyone was waiting to hear into the microphone.

Lauren summoned up all her courage and ran alongside the more than 4,000 plungers assembled on Virginia Beach to take a dip in the frigid waters to raise money for Special Olympics Virginia.

“It really wasn’t as bad as I thought,” she said. “It was cold, but it was all for a great cause, so I’ll be back next year.”

Now in its 28th year, this was the 21st year the company has participated in the Polar Plunge, with TEAM VNG members voluntarily freezing for a reason.

This year, VNG was able to donate $30,000 through employee fundraising and company contributions to help fund programs for local and state Special Olympics and generate awareness for the organization.

According to Jim Kibler, president of Virginia Natural Gas, the company is committed to making a difference in the communities it serves and proudly puts its energy into events like this.

“Our employees have a long history with this event,” Kibler said. “When we saw an opportunity to get involved in 1999, no one knew we would be setting up for the event 20 years later. The entire VNG family has truly embraced this event.”

VNG fielded a team of 32 employees, friends and family for the annual event, including 12 first-time TEAM VNG plungers among those who have plunged since the company became involved.

Like Tammy Kennedy, VNG special projects coordinator, who took the plunge for the 21st time, and even took part in the double-dip “Splash and Dash,” which included a 4-mile run along the beach followed by the first of two dips in the ocean.

“The plunge has grown into so much more than just a chilly dip in the ocean,” said Kennedy. “Our employees take part in everything from the plunge to the costume contest and now the double dip. Once our employees get involved, whether they plunge for the first time or just come down for the event, they keep coming back.”

This year, more than 4,000 plungers braved the chilly 43°F water temperature and raised more than $1.3 million. Over the past 20 years, VNG has contributed more than $426,000 to help Special Olympics Virginia provide year-round sports training, competition, leadership opportunities, and health services to more than 25,000 athletes of all abilities.

Virginia Natural Gas is one of four natural gas distribution companies of Southern Company Gas, a wholly owned subsidiary of Southern Company (NYSE: SO). Virginia Natural Gas provides natural gas service to nearly 300,000 customers in southeast Virginia and has been recognized as one of the safest, most reliable and customer-focused natural gas service providers. Consistently ranked in the top quartile for customer satisfaction by J.D. Power and Associates, the company has also been recognized by the Virginia Department of Mines, Minerals and Energy and the Virginia Oil and Gas Association for its safety, community outreach and educational programs, and was named Local Distribution Company for three consecutive years. Virginia Natural Gas has been ranked by its business customers as being one of the most Trusted Business Partners in the utility industry according to Cogent Reports, and as one of the Top Workplaces in Hampton Roads by Inside Business. For more information, visit virginianaturalgas.com and connect with the company on Facebook, Twitter and Instagram.